Go Directly To Rewards
Welcome to the PledgeManager for Testament!
If you missed our campaign, don't dismay! Just choose an option below.

Testament is a cooperative monster-battle board game for 1-4 players designed by Yasushi 'Kuro' Kuroda, creator of Unicornus Knights, The Ravens of Thri Sahashri, and Alicematic Heroes. Testament features tactical combat, challenging boss fights, and deep character customization and is known for its punishing difficulty and deep reliance on teamwork.

Testament is only available direct through Japanime Games. Backing the campaign guarantees your copy from this limited run - stock leftover after fulfillment is complete will be available on our website or at our convention booths only - there is no retailer pledge available, sorry!

Testament is a fully cooperative board game that features tactical combat, intense boss battles, and engaging character customization. Taking inspiration from MMORPGs, and in particular Final Fantasy XIV, Testament’s core design is built around the “holy trinity” system found in such games, which emphasizes party combat roles like tanks, damage-dealers, and healers/support characters.

In Testament, players control four heroes and begin their adventure by assigning each one specific starting skills. These skills are leveled up over the course of the game's campaign through a skill-tree mechanic seen below.

Each turn, enemy cards are drawn and combat begins. The players must defeat these creatures by effectively using their skills all the while managing mana, aggro, and various enemy threats.

The game consists of six stages in total, with each one culminating in a challenging boss battle. These boss encounters have their own special rules, so players must stay on their toes if they wish to keep up with each boss's distinct abilities and battlefield conditions. Do beware, though: Testament's level of difficulty is not for the faint of heart. In fact, the game is so punishing that less than twenty percent of players will clear all of its stages on their first attempt, with many failing on the very first stage.

Although Testament supports up to 4 players, it can be played entirely solo as well.

In an isolated region of the kingdom, a mysterious ship emerged from a crumbling mountaintop one day—a ship that would come to be known simply as the Ark. The ruins of a highly advanced civilization, the ship left the kingdom bewildered by its sudden appearance and intrigued as to its origins and what might lie inside. This curiosity fueled the formation of a large research party that was dispatched to the Ark’s location almost immediately after its discovery.

Little did the surveyors know, however, that the enigmatic ship would ultimately be their final destination...

After months of no communication from the investigation party, the kingdom sent a detachment of rank-and-file soldiers to make contact with the researchers. Upon arrival, though, the soldiers found the team, or what was left of them, not far below the ship’s deck. The grisly scene before them told the tale of a gruesome and untimely end for the men and women of the original surveillance party, as well as what might be lurking inside the arcane transport. It was then that the expeditionary force themselves came under attack from heinous creatures—some of which were as tall as the kingdom’s greatest spires—never to be heard from again.

On two additional occasions, crews were sent out to investigate the ship—teams comprised of scholars, experienced heroes, and even specially-assembled fighting squads—but none returned. A year has passed since then and the kingdom is now offering an enormous reward to anyone brave enough (or perhaps foolish enough) to plumb the Ark's depths and live to tell the tale.

A valiant knight named Holland Mason has formed his own expeditionary force and looks to set off for the mysterious ship. Assuming control of his squad, will you live long enough to collect the reward, or will you fall like all the rest?

Below are the four heroes the players will assume and customize.

Each hero in Testament has their own unique ability that allows them to carve out their role in combat. However, while each hero is modeled after a certain character archetype (tank, healer, damage-dealer), they do not have to be used in that way. That is to say: Kukurito, who by default is typically used as the party's healer, can be customized in a way that allows him to be the group's tank.

Below is a look at the six bosses that players must defeat at the end of each stage. Each boss has their own abilities and attacks and thus requires a different strategy than the last.

Below is a short explanatory manga that shows the basics of how to play Testament, as illustrated by Hiromi Taihei and Tatsuma Ejiri.

You can also download Testament's entire rulebook here, for a complete breakdown of the rules and how to play. (It can also be downloaded from the game's BGG page here.)

Below you will get a glimpse at all the various components that come inside Testament's box.

To take a closer look at some of the cards, click the image below.

Sorry, Brazil and Russia, international fulfillment centers are restricting shipments to you, so we cannot ship direct to addresses in these countries. Please make arrangements with a forwarder or a friend in another country to join in!

Japanime Games is dedicated to bringing you the finest games from Japan and beyond! It's our goal to import and translate the best games from Asia to bring those great games to a wider audience. Our games feature some of the finest art that can be found along with engaging gameplay and quality components. We are committed to great customer service and have hundreds of thousands of happy customers. For more information about Japanime Games, see www.japanimegames.com.

Founded in 1997, main activity since 2007, Manifest Destiny has designed and published a median of 10 games a year, selling them on amateur market places in Japan, typically the biannual "Game Market" in Tokyo. Up until about 2013, they mostly did card games that could fit in a tuck-box, and printed them in small print runs as low as 100 copies, sometimes even just 50. From about 2014 and on, they have started to also do the occasional larger board game. For more information about Manifest Destiny, see http://ash.jp/~md/.

LionWing Publishing is a localization & publishing company bringing Japanese tabletop games to the West. They concentrate on localizing dynamic and engaging games, working with both independent design circles as well as established publishing companies interested in expanding their audience by way of localization. LionWing specializes in localizing anime-themed board games that offer both unique gameplay experiences and beautiful visuals. They launched their first Kickstarter in the summer of 2018 for a Japanese board game called Sainome Colosseum R and took in 200% of their funding goal. More information can be found at https://lionwingpublishing.com/. 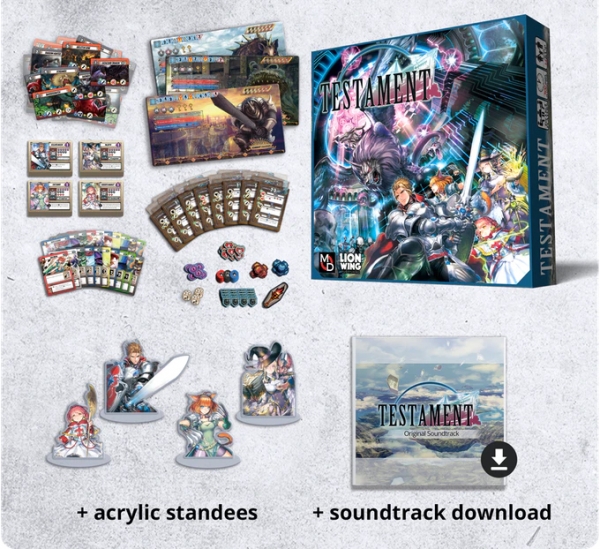 Get all the goodies!

Note: We do not ship to Brazil or Russia 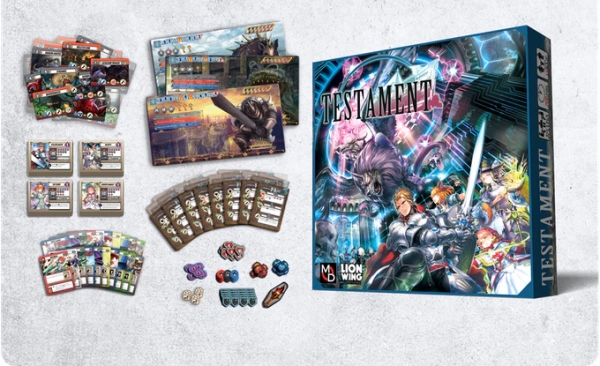 One copy of Testament

Note: We do not ship to Brazil or Russia

One last step to go!

Share your email, we will send you an invite!

If you're already have a PledgeManager account from another project, just sign in using the button below to join the project.

Complete your information below and we will send you an email to get started!